The sun has been out today in Manchester and I’ve been planting some of the plants we bought at Bodnant Gardens yesterday.

Here’s my ‘In a vase on Monday’ which is hosted every week by Cathy over at Rambling in the Garden. She’s got lovely roses and alot of pink and white in her vase today.  I’m going to try growing sweet william next year.  My sweet peas are nowhere near flowering but are growing well so fingers crossed.
Do have a look and join in if you can.
I enjoy everyone’s links and flowers so much – they are so creative.

The vase is a small lead-crystal vase (about 10 inches high) which belonged to the mother of my good friend who died recently. She told me years ago it was a wedding present (1964)  but I never saw flowers in it in all the time I knew her; just loose change.   It has a smaller ‘sister’ vase which I found in a cupboard at my friends house. His Mum passed away about 18months ago and his Dad just three weeks later.

It’s good to use the vase for this arrangement as it would have been his mum’s birthday this week. I’ll be using both these vases regularly now and think of J and her lovely white country garden rose in her yard garden (just about the only plant there!).  I took a picture of the vases as Cathy asked about my last vase.  They’re really pretty but very heavy. 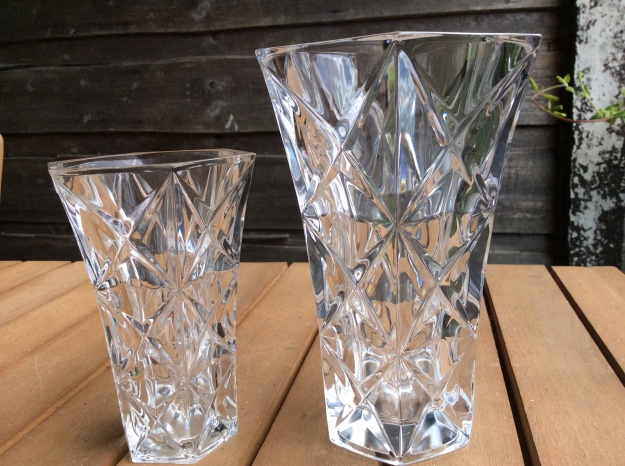 My orange rose in the front garden has one rose out and alot more buds, so fingers crossed it will feature next week.

What have you got flowering with you?

11 thoughts on “In a vase on Monday – pinks, purples, white and yellow and a bit of crystal”

DAY 27: STONE #Augustbreak2021 it was so good to be back 3/8 @cottonopoliswi crew face to face. Zoom has been good but I've missed them
DAY 10: LAVENDER it's probably my favourite flower and scent - part of our wedding bouquet too. #Augustbreak2021 I love it any time of the year - high summer covered in bees, just 'going over' as in this from our front garden today...getting ready to dry and keep.
DAY 9: LETTERS #Augustbreak2021 Self love -