‘Slow down and enjoy life. It’s not only the scenery you miss by going too fast – you miss the sense of where you are going and why’ Eddie Cantor, US Actor and Radio Broadcaster.

The very hot weather continues here in NW England, the ground is parched, we’ve had huge wildfires on the moors near Bolton and Oldham, we’ve got the threat of a hosepipe ban from early August (not that I’ve got a hosepipe) and everyone seems to be moaning about the heat.  I’m not complaining about the heat – I’m cheerful as it means my arthritis pain is minimal, which makes a massive difference to my wellbeing and energy levels.  So I’ve been doing more walking in the woods near us and getting out and about.

So I’ve been watering my plants with the watering can every evening; I find it a very relaxing, mindful activity.  I’ve had a very relaxing time in July as I’ve got time off work – time for Wimbledon and enjoying the sunshine (with factor 50, shades and a hat).

I decided to go with a bright arrangement today.  For my Vase, I’ve picked:

The print ‘Enjoy Today’ was designed by Becky Bettesworth.   I bought it when I visited Cornwall for the first time in over 30 years in 2015.  I sailed often when I was younger and it reminds me to be ‘in the moment’ and accept the direction of the wind (and/or life).

The jug and mug are made by charlottemacey.co.uk/
They have cute, stylised birds flying on the inner rim.   I bought these in Cornwall too. 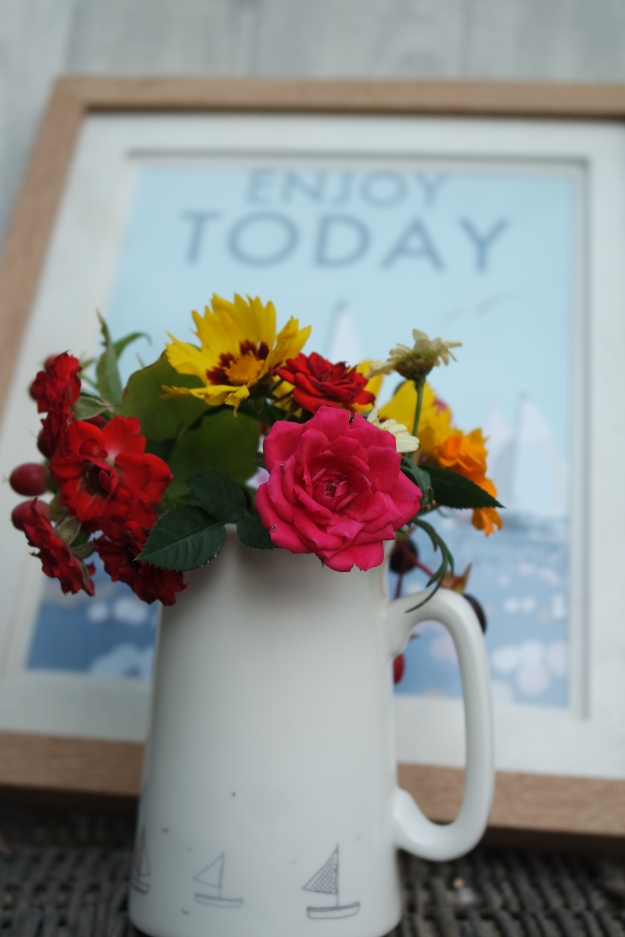 It was so hot, I photographed the vase in the early evening shade, so I am pleased the flower colours came out so well.

Do have a look at Rambling in the Garden where Cathy hosts the meme – she has a lovely purple and dark pink posy and a nice bottle of red.  There are some beautiful arrangements from garden bloggers around the world.  They give me so much inspiration for my garden. 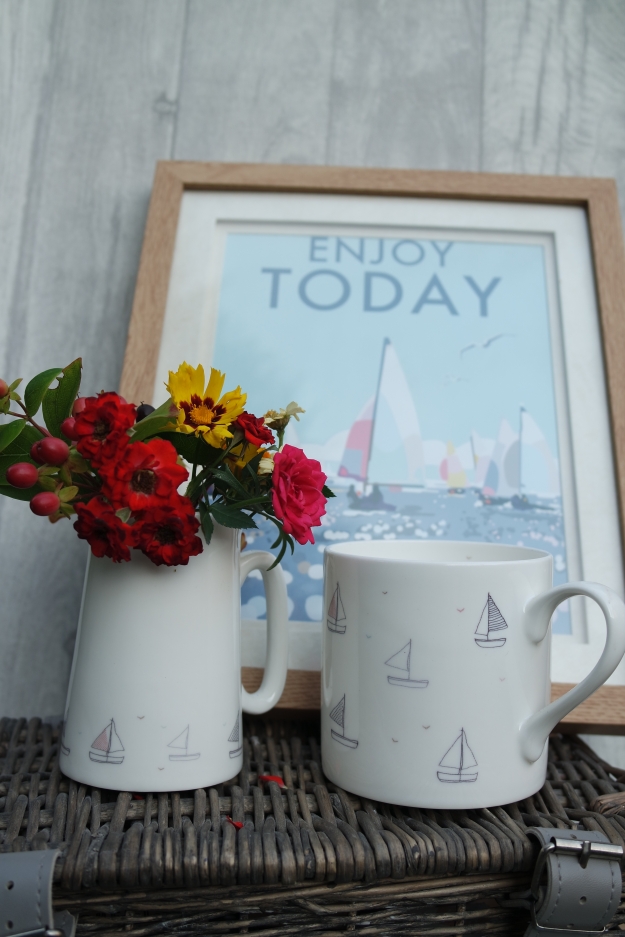 Out and about in Greater Manchester this week…

We’ve been going to Tatton Park show on and off for about 12 years – though we last went two years ago. I’ll write more in another post but it was a great day out, we came back with flowers and lots of ideas as usual.

It won’t surprise regular readers to see that it features, purple flowers and is very calming and restful. It also had a bar full of Manchester gin.
Fun fact: you can see My Chap and me in this photo – in the mirrors. 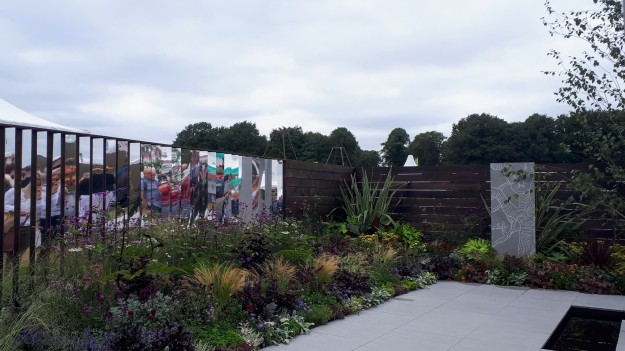 A garden for Manchester Gin 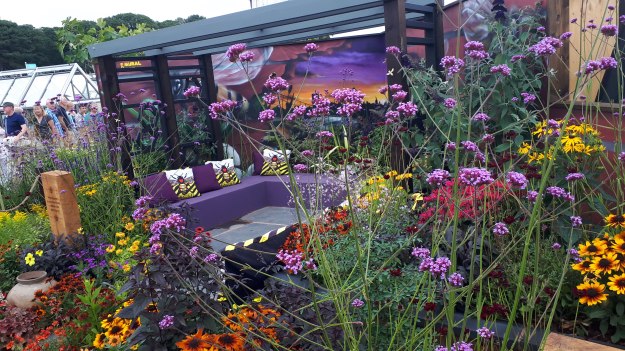 A garden for Manchester – lots of bees

Bee in the City – public art around Greater Manchester – 23 July to 23 September 2018     beeinthecitymcr.co.uk

The worker bee is the symbol of Manchester, due to the industriousness of its people.  If anyone is local to Manchester, they won’t have missed the news and social media buzz around the latest public art.  There are 100 large bees and 130 smaller ones dotted around the area.   Bees appear everywhere, on buildings, on street art, and even on bins,  but there are many more than usual this summer. You can find out how to get involved on the website or by following @beeinthecitymcr  and #BeeInTheCity  There’s:

Here’s the first bee (a little bee) I found on the ground floor of the Central Library – (www.manchester.gov.uk/centrallibrary)) created by Gorton Sure Start, who are in East Manchester.  Most of the little bees have been decorated by primary schools or groups working with young people, like Sure Start.   The smaller bees are in clusters in creative places like museums and libraries.

By the way, the central library is well worth visiting any time as it has a wealth of local history information, a stunning 1930s circular reading room and a fine cafe too.  This isn’t the first public art trail we’ve had in Manchester we had Cow Parade in 2004 – but it was much tricker to find the life size cows as this was before social media. 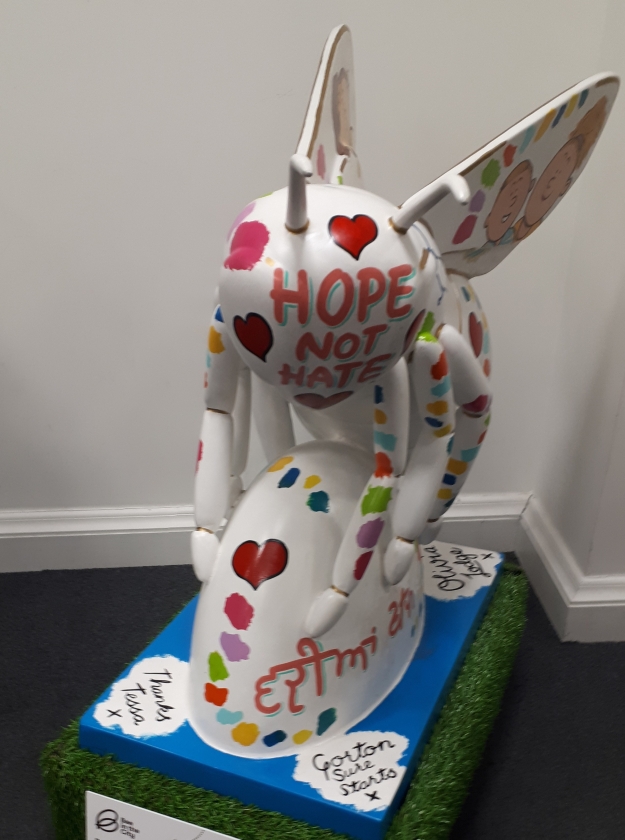 The bees will be auctioned in the autumn to raise money for the Lord Mayor of Manchester’s charity – We Love Manchester – www.welovemcrcharity.org/

You can also donate online
www.justgiving.com/campaigns/charity/welovemcr/beeinthecity

I’ll write more about what bees I find, and where they’re located. I’ve seen about 10 so far, there’s a couple down Oxford Road and many around the City Centre.

Enjoy the weekend – and the sunshine.

If you’re local, how many bees have you seen and what’s your favourite? If you’re further away, have you followed a public art trail like this?

WEEKEND ADVENTURE - I made a #silverclay pendant (double sided) with sparkly purple dichroic glass. My 2nd pendant is a different shape and style.
WEEKEND ADVENTURE!
This gorgeous @irregularchoice bag is getting 1st outing this weekend @rhsbridgewater