Note to self: Don’t join a linkup then move to self hosted two days later – My fellow bloggers is there any chance you could comment on this post on my new site?  – BlogOn – Introduce yourself – and Why I go to blogging conferences/

In a couple of weeks (16th Sept), I’m off to a blogging conference run by the team at BlogOn (BlogOnuk.com) – it’s only down the road at Hotel Football, in Old Trafford, in Manchester – about three miles from my house.

I’d heard about these conferences which have been held twice a year since 2013 – everyone said how great it was.  I went to one of their Conferences in May; it was really well run and very useful.  I learnt so much that day, especially about Pinterest  It was lovely to meet people I’ve known on Twitter/ Instagram face to face too.

My highlight of the conference was hearing Jason Todd from the Art of Brilliance talking about positive psychology in life and work.  For example:

‘Every day is a Special Pants Day – Life’s too short. QUIT waiting for happiness’

This led me to attend their first Festival of Happiness in at Victoria Warehouse in Manchester in June.   They’re holding another Festival in Birmingham on 29 June 2019 – info.  I thoroughly recommend following them on twitter and attending their conferences.  Such a wonderful, optimistic and positive day.

I hear there are some tickets left – Ticket Information

It’s not just for parent bloggers either.  The goody bag was massive with loads of useful things.

Whether you’re a new blogger or been writing for years – There’s so much to gain from attending a blogging conference:

END_OF_DOCUMENT_TOKEN_TO_BE_REPLACED

I’m planning on writing more this year, getting a shorter URL and I’ve got plenty of ideas for blog topics. More photos of flowers too. This weekend I’m off to a blogging conference run by the team at BlogOn (https//BlogOnuk.com) – it’s only down the road at Hotel Football, in Old Trafford, in Manchester – about three miles from my house. I’d seen bloggers taking about how well run, and useful, the conferences are, so I signed up. I wanted to learn some new skills, update my knowledge, especially about Pinterest, and maybe talk about collaborations. I’m very much looking forward to meeting some other bloggers face to face, that I know via Twitter and other social media. It’s always good to spend time with people who do a similar role to you, and have some fun.

If you’re coming to the conference come and say hello 🙂 I’m hoping I’m not a fish out of water.

I’m Bec, I live in Monton in Eccles, which is in Salford in Lancashire. Monton is on the West of Greater Manchester, about six miles from the city centre; it’s leafy round here, with Worsley Woods, a couple of golf courses and the Bridgewater Canal is at the end of our street – we’ve got a good cafes, bars and restaurants around here and a growing number of street art bees.

I blog about flowers, gardening, wellbeing and our adventures out and about, usually in the Great Outdoors . I’m a Southerner originally, born in Berkshire. I’ve lived here for 20 years, visiting since 1989, so I’ve seen lots of changes around Manchester.

I’m definitely in my spiritual home among the friendly Northerners. Also, I know the correct words to use to order a bread role in any part of Greater Manchester. In Eccles its a barm 😉 I eat my chips with gravy, but never mushy peas (Devil’s work). 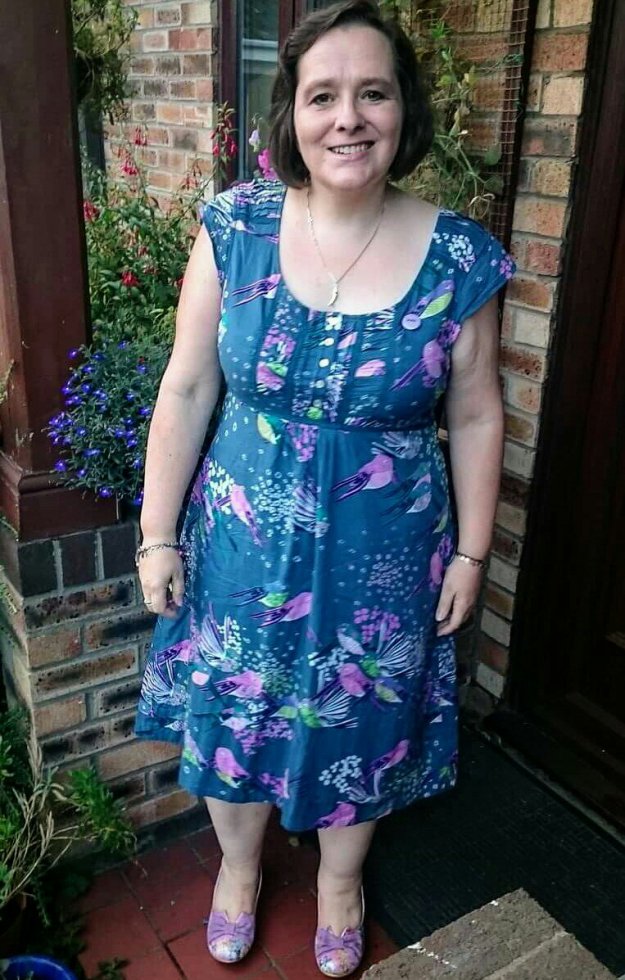 This is the first picture of me I’ve ever put on the blog. I feel like I should tell you I’m wearing a White Stuff dress, with Razzle Dazzle Irregular Choice shoes – Outfit of the Day and all that 😉 The photo was taken just before I headed out to my Hen Do afternoon tea last September.

I could easily pick three gardeners, three historians, three chefs, three novelists, three adventures, three musicians, three scientists, the list could go on. But, I’ll confine myself to a group who’d have so much to discuss and share – Nigel Slater, Mary Beard and Charles Darwin.

I’ve raised alot of money for charities to research Motor Neurone Disease (because My Chap’s brother died aged 49 in 2017 from MND) and cancer (because lung cancer took my Dad 18 years ago when he was 70). In my day job, I’ve helped academics win millions in funding for research with patients in the NHS – just about any topic or disease you can think of. I’m proud I help people make a difference – and make the world a better place.

I watched most of the classic Disney Films as a kid in the 1970s, Sleeping Beauty, 101 Dalmatians, Snow White, Lady and the Tramp, etc. My favourite is Jungle Book – I love the songs. I’ve never seen Bambi though.

However, since Disney bought the Star Wars franchise, I’m taking Leia at any age, as my character…

I was 11 in 1977 when Star Wars came out and I’d never seen a woman as the lead, a hero, in charge – it affected me deeply. The film was massive in the playground; I think I saw it three or four times that year. I was, and still am, a massive Star Wars and sci-fi geek. Wish I’d kept the light sabre though. In the recent films Leia, as a General, is only a decade or so older than me, so I hope I have her compassion, determination and wit. 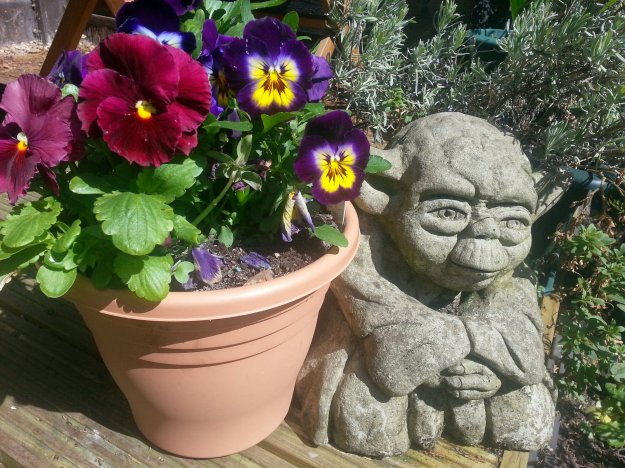 Yoda and Pansies in the Spring Sunshine

I have a special love for Yoda; he has appeared so many times in the blog he has his own Tag.

Stretch! Wiggle my toes and fingers. I have osteoarthritis in my fingers, toes and in my back, so I often wake up very stiff.

A round the world airline ticket for My Chap and I, to visit friends and family, watch some tennis, go to some gigs and walk on beaches. Then we’d come back to Manchester, pay off and do up our house and garden. We’d stay here, as we love Manchester, but we’d also love a house by the sea.

‘Difficult to see. Always in motion is the future’. Yoda

Time travel – not only because I love history – but it would mean I could visit people in a instant.

When I was a teenager, My Dad used to talk about ‘Things a Girl Should Know’, most were practical like how to open champagne, how to shake hands firmly, tie bow ties properly, change a tyre etc. He taught me to cook too, but that’s a whole other story.
He told me to be true to myself, be kind, help people, when you can and say No to things you really don’t want to do.

And to trust your gut.

I’m absolutely bobbins at doing emojis, so I can only use three (typing the characters too) – 🙂 😉 😦

My Granny Dolly who was a country woman, a working class suffragette, dog breader, judge at Cruft and a terrible cook, said to use moisturiser every day. Her skin was amazing, even in her 80s, and I’m afraid I didnt take this advice. I realised the error when I turned 40 and have mostly remembered the moisturiser since then.

This is the bay at Flinders, on the Mornington Peninsula, just south of Melbourne. My Australian family live here some of the time. Flinders is a village, with a General Store, one pub and a few coffee shops – it’s a peaceful, sleepy and relaxed place. I love it there.

Be a guide around one of the great gardens, photographing people, places and plants – sharing and tweeting too.

I don’t have one favourite place – I guess mine is more about what places make me feel – a state of mind. Contentment, peace, relaxed but it would definitely have beautiful flowers.

And now to see if I can add the link button without a laptop. It broke on Monday so I’m using the tablet at the moment (TMI probably). Oops I chopped my head of on the link box.

Do have a look at the BlogOn X – linky for more blog and bloggers 🙂 I’ve found some new ones to follow.

Any thing I’ve missed? Let me know in the comments.

But, in the meantime, remember Life isn’t a dress rehearsal.

I’m happiest by the water whether it’s rivers, lakes, the sea. All my Australian family love the sea too.

This is Flinders, a village on the Bass Straight side of the Mornington Peninsula where they live some of the time. It’s peaceful and beautiful at Flinders. #rechargethebatteries.

We are so excited to see our Aussie family in Melbourne next month.