I’d been thinking for a while that I haven’t taken many photos or described what’s happening in our garden – so I looked around for a linkup to prompt me to join in, and found Six on Saturday – hosted by thepropagatorblog.wordpress.com  (participant guide) who lives in Reading, Berkshire. That’s where I went to school, though I’ve lived in Manchester for over 20 years – so it’s a small world sometimes.   I’ve been following various contributors and, as usual, been inspired by the plants they grow and what they write about – but hadn’t got my act together to take photos on a Saturday.

So I’ll be covering what’s been happening around our garden, the locality in Monton, Eccles, Greater Manchester, the North.  Mostly gardens and places we visit with an emphasis on plants.  Knowing me, I doubt I’ll be contributing every week as time runs away from me, but I’ll try my best 🙂 I hope this post covers the Six on Saturday brief.  END_OF_DOCUMENT_TOKEN_TO_BE_REPLACED

Let us be grateful to people who make us happy, they are the charming gardeners who make our souls blossom.  Marcel Proust 1871-1922

This week is the third birthday of ‘In a Vase on Monday’ hosted by Cathy at Rambling in the Garden. This week she asked us to join her and write on the theme of three.   Cathy’s blog post really resonated with me, her kind words in my difficult times last year really helped me, as did her fellow gardening bloggers from all across the world.  Reading their blogs and all the beautiful flowers lifted me so much… and inspired me to plant, prune and grow.  I’ve picked three kinds of plants to represent three groups of my friends.

My friends have helped me so much especially these last 18 months, just as my garden has.  Writing my blog helped me too even though most of the time I was so exhausted, I could barely string a sentence together or take photos.    I’m feeling so much better now, but my new role means reams reading, many people to meet and numerous projects to plan, so  less time for getting outdoors, let alone blogging.
My mission for 2017 is to be much more organised! 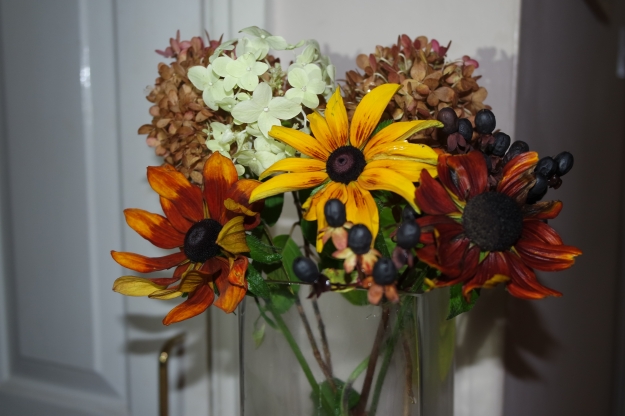 13 November 2016 – 3rd birthday for In a Vase on Monday -Hypericum, Rudbeckia, Hydrangea

These flowers represent just some of my friendships –

The square vase is a gift from one of my oldest friends from University in Stirling – I’ve known her and my other Uni pals thirty years this autumn.  How did that happen ;-)? I feel 31 in my head apart from when my arthritis, aches and pains are playing up.  They’ve been such a support to me over so many years, but especially these last 18 months.

Cathy also talks about how picking flowers for her Vase has made her very observant about her garden.   This certainly chimes with me – noticing what is in my garden, what’s in bud, flowering, what’s gone over – and also what’s been munched by the slugs.  It helps with my mindfulness, which is one of the  activities which helps me daily.  She also says it’s humbling to read how the meme has changed people’s lives.  I know it’s changed mine.

I know how much though goes into Cathy’s comments on every blog that links up to the meme.  Her words helped me so much when I was feeling so overwhelmed and exhausted.

And I’m sure this will make Cathy smile – as usual I’m late with my contribution.  I don’t think I’ll count up how often I’ve actually posted on a Monday and how often I’ve missed the day – oops. Cathy says it doesn’t matter so I guess I’ll keep picking vases and posting them a bit late.

It’s been a very hectic at work – and frankly it’s been another momentous week for the world.  So I’ve been reflecting this week about remembrance, friendship and the future. 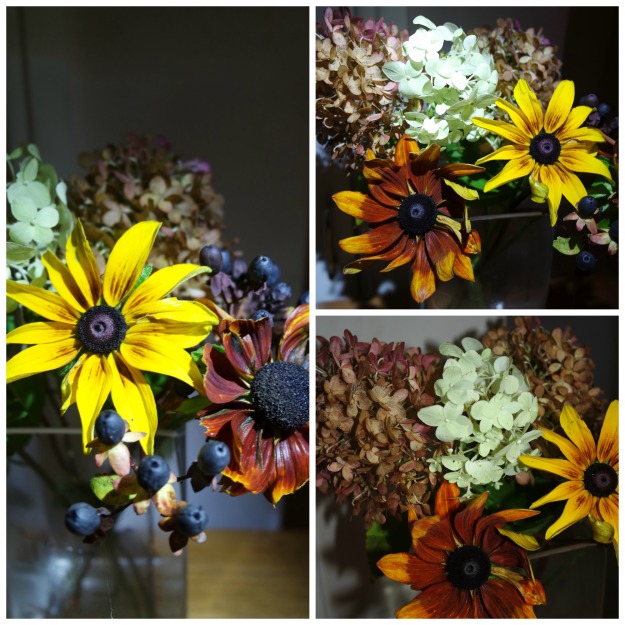 13 November 2016 – 3rd birthday for In a Vase on Monday -Hypericum, Rudbeckia, Hydrangea

This week I went to a public meeting about the plans for the new Royal Horticultural Society Bridgewater Garden on the site of Worsley New Hall in Salford.   It’s called Bridgewater because the canal runs to the south of the site.

The garden will be about a half hour walk from our house along the canal.   I’ll be a regular visitor; just like my Mum who’s a regular visitor at Wisley.  We often walk up to Worsley Green and the Woods, no one can believe how lovely it is despite being in the middle of the city.  We’ve been getting out on more walks around Lancashire and Greater Manchester too, so fingers crossed I might get up a small hill or two next year.

I can’t tell you how excited I am.   It will be stunning…  a new beginning.

In other news, we think we’ve found our wedding venue for September 2017.  It won’t be a surprize that it has a beautiful garden.

My Chap is my rock – he has truly helped my soul blossom – he IS my new beginning.

Our weekend was spent pottering around in the garden and house, apart from a  trip to get bike parts from a shop in central Manchester on Sunday.  There was a lovely market at Spinningfields (organised by Makers markets www.themakersmarket.co.uk/) next to John Rylands Library on Deansgate so we had a quick look around – as we only had an hour on our parking (£2.90)  Manchester City Council really need to make parking in the City much cheaper or free all day on Sundays (as it used to be).  The high cost doesn’t help the retail and entertainment sector – you’re charged 8am to 8pm every day – it’s ridiculous. 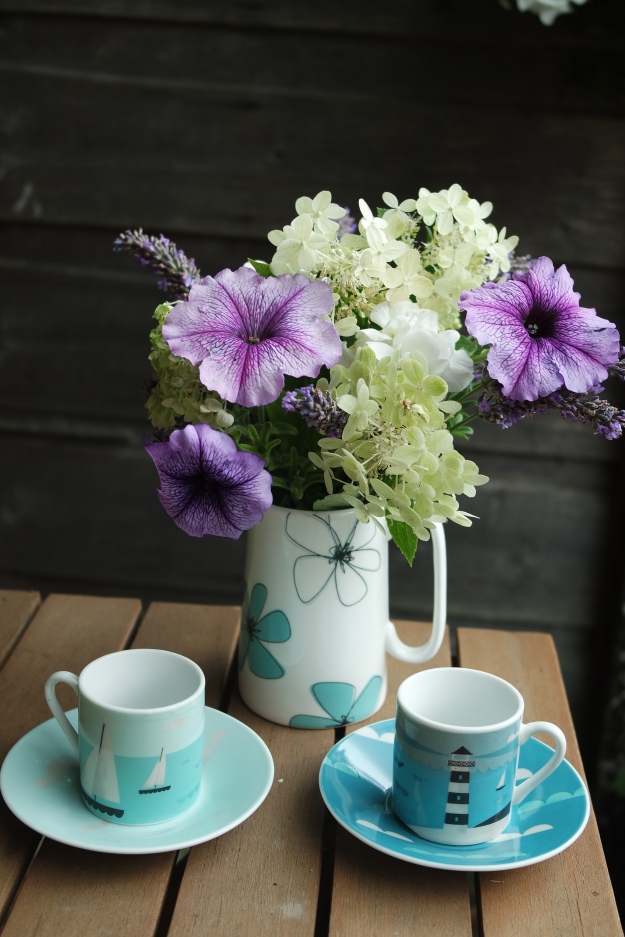 About John Rylands Library
The Library is my favourite building in Manchester, it was opened  in 1900 in neo-gothic style and was one of the first buildings in the city to have electricity. It was built by Enriqueta Rylands in memory of her husband John, to house their extensive collection of books and ancient texts.  It has an excellent café and truly outstanding historic toilets in the basement.  It’s now part of the University of Manchester and is, therefore, part of the third largest academic library in the UK.

I really must go back again soon for a few reasons:

John Rylands Library is a incredible building celebrating the glory of learning – do have a look inside if you’re in the area.  ANYONE can go inside and have a look around and it’s FREE too. It really is worth it.

At the market
The sun was shining, live music was wafting across the square and there were plenty of people milling around looking at the stalls of food, drink, homewares, clothes and jewellery.     My Chap and I had a wander around.  We bought some coffee ground by Dex from Second City Coffee. Obviously, I bought the coffee named after Cottonopolis (my Women’s Institute – www.cottonopoliswi.com/).    It’s a lovely coffee – citrus and nutty.  And finally got to meet Dex who I’d chatted to via twitter – lovely chap. 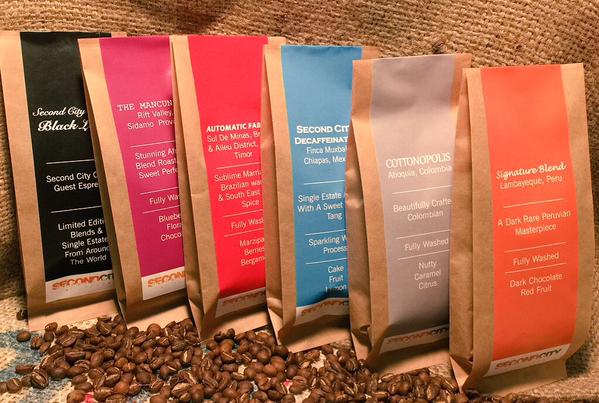 We also saw some beautiful china made by Amy with modern flower patterns and colours.  I couldn’t resist  a new jug (mild mutterings from My Chap) – it’s about 5 inches high.  I was good and picked a colour that would match our existing Boston Denby china (Blue) and our espresso cups (and not purple my favourite colour!). Green is My Chap’s favourite colour and he approved of this lovely aquamarine.   Amy said she is based in Stoke so do check her out if you’re in the area and she often comes to the various Makers Markets in Uttoxeter, Cheadle, Knutsford, Sandbach, Middlewich and West Didsbury.

UPDATE – I heard from Markets Market that they are OPENING IN MONTON in October 2015 (I live in Monton so I am very excited about this.

My vase
The flowers I have chosen today  are picked to go well with the beautiful jug I bought from Amy Helena Clarke ceramics www.ahclarke.com  . They are:

Do have a look at all the lovely vases hosted by Cathy over on www.ramblinginthegarden.wordpress.com – glorious pinks and purples today with a wonderful antique quilt.  People post vases from all across the world and it’s just amazing to see what grows where (and when too!).  And I’m late with my post as usual – ho hum I’ll try harder next week.

Have a wonderful week everyone.

I think we are off to Southport flower show at the weekend.  Have you been?

p.s. this isn’t a sponsored post – I just really liked Amy’s china and I’ve been waiting a while to get some Cottonopolis coffee and I paid full price for everything 🙂

Don’t be afraid to give your best to what seemingly are small jobs. Every time you conquer one it makes you that much stronger.   If you do the little jobs well, the big ones will tend to take care of themselves.  Dale Carnegie

This week I’ve been thinking about how things don’t turn out quite the way you expect; this is one of the reasons I decided to pick these hydrangeas in today’s ‘In a vase on Monday’. The hydrangea macrophyia‘s name is ‘Blue Mophead’.

We planted the hyrdrangea earlier the year in Ericaceous compost (which is acid soil) so the plant should have blue flowers but the plant is clearly having none of it. The newest flower is the blue/purple one but the colour turns to pink and then fades to pink/green. I guess I could add something to the pot to change the flowers back to blue but I don’t really have the time or energy this summer. Maybe next year 🙂

I’ve used this bud vase in my first ever ‘In a vase on Monday’ with tête a tête daffodils back in March. I just wrapped garden wire around the three hydrangea stems so they would stay together and not fall out the vase.   I think I might wrap a thin cream or dark pink ribbon around the neck of the vase if I pick these flowers again.

I think the flowers are beautiful especially as there are so many shades of pink into washed out green.   I’ve moved the pot to the bottom of the garden on the deck so we can can enjoy the flowers when we’re eating and relaxing. Not that we’ve had much chance to enjoy the flowers close up as it’s been pouring down today.

yoda with hydrandea, petunias and some Marguerites – 13 July 2015

There’s been such a lot to deal with this year but I am slowly working through things and I know I’ll get there.

I’ve been struggling to get things done on time, including writing every Monday about my flower vase. I hate being late or missing deadlines so my tardiness has been bugging me. So it’s only a short blog post today too, so that I can FINISH it! Doing a small job well 🙂
Next on the list is answering some emails/blog comments and then some flower dead-heading/weeding and planning good things for the weekend with my Chap.

Do have a look at Rambling in the Garden where Cathy hosts the meme.  This week she’s gone rather artistic with Sunflowers.  This has reminded me I need to visit Manchester Art Gallery to see how the ‘Lost Gardens of Manchester‘ exhibition is getting on – I was there in May and there will be plenty of new plants and flowers by now.

Do you have plants that didn’t turn out how you expected?  And life has a habit of doing that too – ho hum.