Note to self: Don’t join a linkup then move to self hosted two days later – My fellow bloggers is there any chance you could comment on this post on my new site?  – BlogOn – Introduce yourself – and Why I go to blogging conferences/

In a couple of weeks (16th Sept), I’m off to a blogging conference run by the team at BlogOn (BlogOnuk.com) – it’s only down the road at Hotel Football, in Old Trafford, in Manchester – about three miles from my house.

I’d heard about these conferences which have been held twice a year since 2013 – everyone said how great it was.  I went to one of their Conferences in May; it was really well run and very useful.  I learnt so much that day, especially about Pinterest  It was lovely to meet people I’ve known on Twitter/ Instagram face to face too.

My highlight of the conference was hearing Jason Todd from the Art of Brilliance talking about positive psychology in life and work.  For example:

‘Every day is a Special Pants Day – Life’s too short. QUIT waiting for happiness’

This led me to attend their first Festival of Happiness in at Victoria Warehouse in Manchester in June.   They’re holding another Festival in Birmingham on 29 June 2019 – info.  I thoroughly recommend following them on twitter and attending their conferences.  Such a wonderful, optimistic and positive day.

I hear there are some tickets left – Ticket Information

It’s not just for parent bloggers either.  The goody bag was massive with loads of useful things.

Whether you’re a new blogger or been writing for years – There’s so much to gain from attending a blogging conference:

END_OF_DOCUMENT_TOKEN_TO_BE_REPLACED

A change is a good as a rest – proverb

A change of work is the best rest. Arthur Conan Doyle, The Sign of Four (1888) – 2nd Sherlock Holmes novel

The more regular readers of this blog will have noticed that MOST of my flowers vases contain purple, pinks, lilac and white flowers with red appearing now and again. So perhaps people might think that’s the only colour scheme in our garden – it’s not.  I walked round looking for flowers to pick, it was a very overcast day here in Manchester, a couple of different yellow flowers popped out from the gloom.

Definitely time for a change!  So this week’s In a Vase on Monday, in a milk bottle vase, has many yellow flowers and a bit of red too. 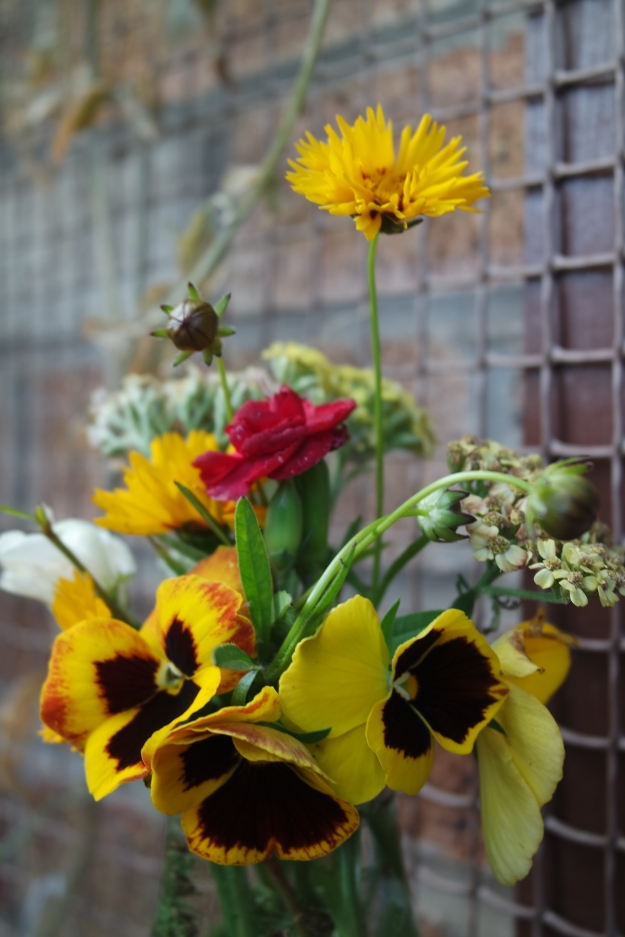 It looks so cheery, even though it’s feeling very Autumnal:

Yellow is associated with happiness and joy especially for flower bouquets it represents new beginnings – so that seems appropriate too – since I’m about to enter a new decade.

Do have a look at Cathy’s flowers over on ‘Rambling in the Garden’ – she has one vase with very architectural pink Nerine which look stunning.   She has another vase which has dahlias, zinnia and Persicaria amplexicaulis as well as foliage from oca –  It’s  a New Zealand yam – I’d never heard of this before.

END_OF_DOCUMENT_TOKEN_TO_BE_REPLACED

An update on my  #100happydays challenge – http://100happydays.com/ from last month. It’s all about our holiday to Lisbon.
Lisbon is a wonderful city with a very long history, the sea, great views and suburb food; There’s loads to do including visiting art galleries. museums and castles. It’s easy to get around with trams and metros which is handy as it has ALOT of hills but the view are amazing. There are many miradors (viewpoints) around the city. There were many beautiful parks; huge hibiscus and lemon trees in front gardens too.  I know we will visit again. 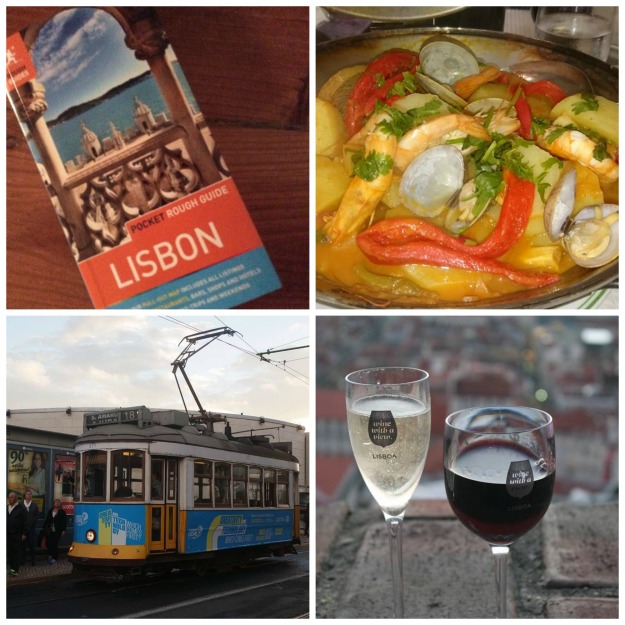 We wanted to visit a European city with a direct flight from Manchester with a lot of history, culture and good food.   A bonus – if it was by the sea and some sunshine – given it was October. We’d never been to Lisbon so that fitted the bill 🙂

We found a great apartment in a 1930s modernist building, via Housetrip (www.housetrip.com) near the University.  It was wonderful to live among the locals, use the local shops and practise our Portuguese 🙂 and there was a metro stop 5 mins away.  The weather was grim the first day, very wet because there was an Atlantic storm going over.  It was overcast a lot of the week but warm.  The locals kept apologising for the weather which made us smile – warmer and drier than Manchester for sure.

Portuguese food is just lovely – alot of fish, Mediterranean  and spices. Portugal was a huge sea power in 15/16th Centuries and owned most of South America, Indonesia and Macau too.  It has a big fishing industry and your tinned sardines have almost certainly come via Portugal.  There was a sardine shop in Lisbon – just tinned sardines 🙂
My chap ate a pastel-de-nata (Portuguese custard tart) every day – I had fish every day.  I’ve got a long list of fish species in Portuguese now.  It’s always an adventure ordering fish abroad, as you’re not always sure what will arrive on the plate.
And I haven’t even mentioned Port 🙂

Belém was the gateway to Lisbon and protected the entrance of the River Tagus.  It is well worth a visit especially as it’s the home of the The Torre de Belém, the symbol of Lisbon (and a world heritage site). This is a square tower which would have been accessed by boat; about 50 feet from the shoreline.  It was built in 1514 in the middle of the river.  Until the Lisbon earthquake in 1755 changed the course of the river, thousands died and many of the magnificent buildings were destroyed.

The caravels (ships) left from Belém in the 16th century to discover the West Indies, South America and the Far East.  In 1960 ,a 50 metre monument, in the shape of a carvel, was built to celebrate 500 years since the death of King Henry the Navigator.  He’s at the front facing the sea, with huge stylised statues of famous Portuguese including Vasco de Gama.  It has stunning views from the top (and a lift).

Elsewhere in Belém, there’s the Mosteiro dos Jeronimos (the monestery is a world heritage site) and many art galleries.   It’s also the home of Pastéis de Belem which is where the pastel de nata was invented in the 1830s.

A fascinating place to visit, originally a moorish castle in the 1100s (though the Romans were there first, as you’d expect). It has been in continuous habitation since then, the Portuguese Royal family lived there in 18/19th century.  It’s a huge site, with extensive ramparts and the views from the castle are stunning – I took a day and night shot. We spent a very happy hour or so drinking Portuguese wine on the ramparts over looking the city – it didn’t close until 9pm.  It’s a real shame that the we don’t do the same here. 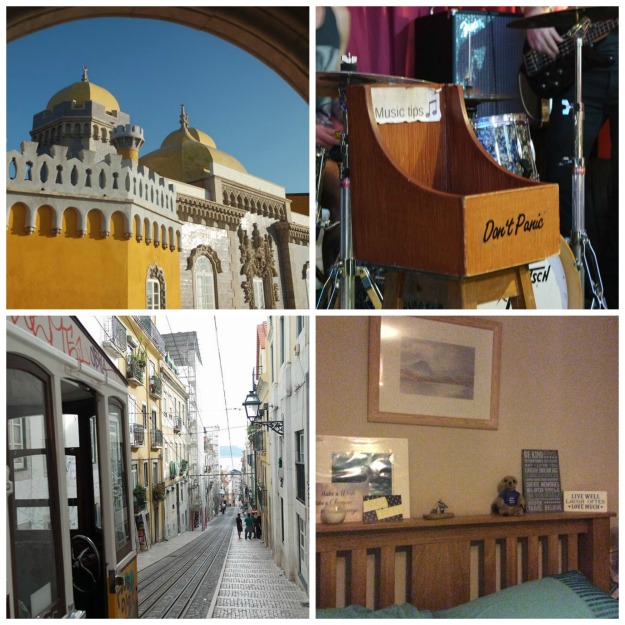 There should be two ‪#‎100happydays photos because we visited two wonderful castles in Sintra – the national palace and palace de pena – I chose pena because it reminded me of castle neuwanstein which we visited in January when my brother and family were over from Australia.    This photograph was taken as the sun was setting, it was truly magical.  We were the last people to leave, the Portuguese bus drivers waited for us too. It’s an easy trip on the train from Lisbon and there’s a circular bus to get to all the sites – don’t walk as it’s very, very hilly.

Sintra is a world heritage site and also has a Moorish caste on the top of the hill and many beautiful gardens.  We only scratched the surface of what’s there.  We could probably spend a week looking around.  We’ll be back there too.

Pottered around the parks of Lisbon but the best thing was a brilliant covers band in Baixo Alto. Their tip box made me laugh – yes they were hitchhikers fans. We listened to some fado too but it was very melancholy, which was a bit much for me in my current mood.

The Bica funicular climbs from Rua da Bica for 245 metres from the Rua S. Paulo, near Santos, to the Calhariz district (Rua do Loreto). We went down the hill in a beautiful wooden panelled carriage which fits about 25 people.  It was built in 1892 and is a national monument.

The lower station of this funicular is almost hidden behind a façade on the Rua de S. Paulo with the inscription ‘Ascensor da Bica’. My chap and I walked past the bottom station twice, because it was covered in plastic sheeting 🙂 There are three funicular railways, and we went on all of them, and two elevators.

Trips on elevators, funicular railways and more views across the city – with churches, the sea, castles great food and a mojitos too.

Lisbon is just an amazing place and it’s people are wonderful too.

The 430am start to get the plane did me in so it was an early night. It was lovely to be home too.

Anyone around the world can get involved in #100happyday or just have a look for the hashtag or on facebook too.

What has made you happy today?

Went to @the_rhs #tattonparkflowershow last Sunday - had a great time even though we got soaked.
Five years on remembering 22 people + all affected at the arena gig that night #aheart4mcr 8k+ hearts across the city centre
He's finished in 53mins for @reubensretreat