“Calming the mind is yoga. Not just standing on the head.” Swami Satchidananda

This week, despite the heat in Manchester, I’ve done quite a bit of gardening in the evenings, when most of our North facing garden is in the shade.  I notice my mood is better if I’ve spent time outdoors, especially pottering around and watering the plants.  I’ve rationalised my plants into bigger pots, pushed together so that I can water everything I need to and bigger pots retain the moisture.  It’s also the first summer I’ve watered shrubs in the garden. It takes me about half an hour to water the pots (with a watering can and water from the water butts).  We have had so little rain here – and the temperatures have been in the high 20s for a couple of months.  Also, I’ve put succulents, sedums and drought tolerant plants in my hanging baskets.  Gardening helps me be mindful – as does yoga.

7 August 2018 – posy of sweetpeas, lavender and dianthus – with The Book of You and a Be present yoga print

How yoga helps my mind, body and spirit

I’ve been practising yoga, on and off, for about 12 years, starting completely by accident.  A friend of mine had a pal who was learning to be an Iyengar yoga teacher so needed people to practise with.  It was right next to work, straight after work so it seemed a good thing to do. It changed my life.

When I was younger I had poor spacial awareness and was always tripping over, which lead to some hilarious incidents including my Steve (my former partner) pulling me out of a peat bog as I’d sunk up to my knees and was slowly falling face forward into the bog.  Another time I went flying, just as a busload of tourists came round the corner in very rural Ireland.  I was always collecting bruises from bumping into things.

It’s a long time ago, but the first things I noticed doing yoga was that it helped me stretch (especially my hamstrings), helped calm my brain as I was concentrating on breathing and the position of my limbs.  I learnt to do corpse pose (Shavasana) not ‘banana’ pose as my first Yoga teacher Jacky named it.  Yoga isn’t a quick fix – it took me about 6 weeks to see the real benefit. I carried on with Jacky’s classes and then John Aplin for years until my work pattern changed.

Now I go to Sadhana’s classes in Eccles once or twice a week (www.sadhanayoga.co.uk).

A couple of years ago, My Chap injured his Achilles and couldn’t run for three months (gosh he was grumpy). I’d been saying to him that yoga would help stretch his hamstrings and he’d get fewer injuries overall.   I ‘forced’ him to go to yoga – it changed his life too. No more running injuries; he runs faster and further.  It opened his stride and helped him regulate his breathing when he’s running. It’s helped his posture too as he has a physical job.  Now he goes twice a week and is a much more organised about daily practise than me.

The very hot weather helps my yoga practise as I can stretch further 🙂 I need plenty of water though.  There’s plenty of research about the benefits of yoga for health and wellbeing; I’ll write about that another time.  I know I’ll be doing yoga for the rest of my life.  More posts about Yoga

“Quiet your mind.  Free your body.”

“Yoga is a light, which once lit, will never dim. The better your practice, the brighter the flame.”

In my vase today

I picked the first sweetpeas (a Spencer mix) which are growing outside my back door. The sweetpeas have been struggling in the hot weather, despite regular watering, and in the shade for half the day.  There are also some pink and red dwarf dianthus and some lavender from the front garden.   The stone ware vase is about 8 cm high  – I bought it many years ago in a local pottery on the West Coast of Scotland.

Do have a look at Rambling in the Garden, where Cathy hosts the meme.  This week she’s on a Scottish Isle and has some beautiful Dahlias.  I like the idea that the flowers are left for people to pick up and enjoy in their own homes. My dahlia’s are coming along nicely so maybe they’ll be in the vase next week.

I have about 15 lavender bushes of various varieties growing in my very sunny front garden, I love the scent of lavender. Lavender featured heavily in our wedding last September.

I’ve written about Sweetpeas, lavender and dianthus on the blog many times – they’re probably my favourite flowers for long flowering time and are easy to grow.

This book has a daily prompt across four sections – Mind, Love, Move, Food.  I’m not following on strict date order as I find it a bit of a constraint, so I flick the book open and pick an action from the three or four on the pages.  I find microactions much easier to do and stick with than a big, long list of changes.  Also, I make a note when the action is something I do already.

I tend to put my daily actions on Instagram (@becinmonton)

I received this book in my monthly BuddyBox* from the Blurt Foundation (hwww.blurtitout.org)  Blurt support people with Depression and Anxiety. I’ve written about Blurt a few times on the blog and their picture prompts on Instagram 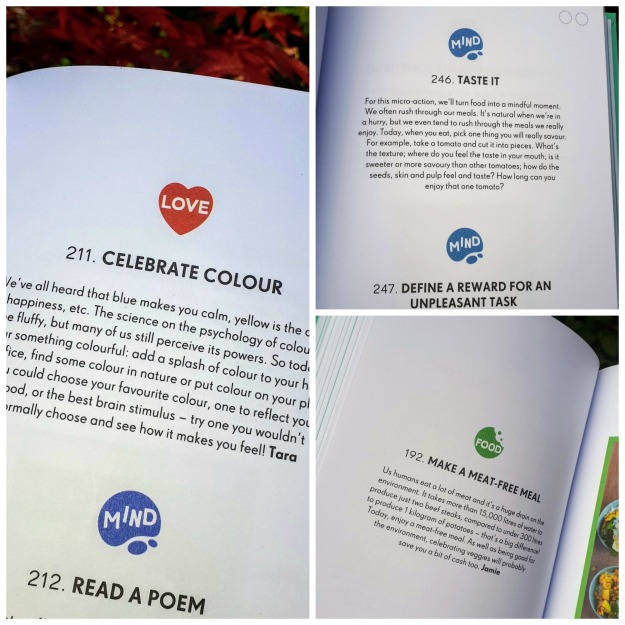 In case you were wondering the yoga pose on the print is Adho Mukha Svanasana.

Have you tried yoga? or daily prompts? Let me know in the comments

20 thoughts on “In a Vase on Monday: be present with yoga”